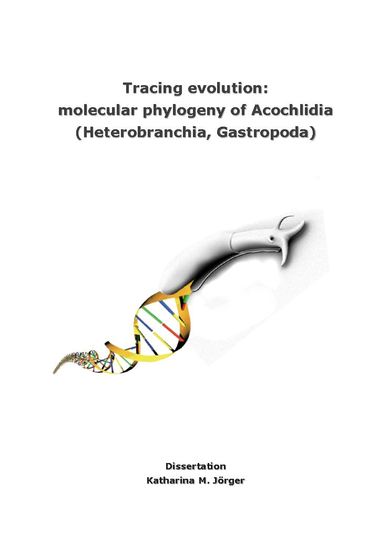 Sediment covered ocean floors constitute one of the largest and at the same time least explored habitats on Earth, still hiding a largely unknown species diversity. This marine mesopsammic habitat also harbors some of the remaining enigmas within heterobranch gastropods, which are puzzling due to their unclear phylogenetic position, their aberrant morphologies and the lack of knowledge regarding their biology and diversity. The limited data available for these neglected taxa rather obscured than improved phylogenetic assessments on Heterobranchia and has left significant gaps in the evolutionary history of this hyperdiverse clade of slugs and snails.

The spatially restricted interstitial environment constrains the morphology of its inhabitants, favoring flexible and vermiform body shapes, i.e., the reduction of shells in mesopsammic gastropods. Acochlidia are the most prominent clade of meiofaunal slugs with regard to local densities and species diversity. Traditionally classified as their own order among opisthobranch sea slugs, acochlidian slugs display a long history of controversial placements, which leave their phylogenetic relationships among euthyneuran Heterobranchia unresolved. Despite of being a small clade (with only 27 species validated prior to this thesis), Acochlidia are globally distributed and comprise a remarkable morphological and ecological diversity. Acochlidian slugs inhabited the marine mesopsammon and successfully transitioned between marine, limnic and potentially (semi-) terrestrial environments, where these slugs exhibit an epibenthic lifestyle. In the flexibility of habitats, Acochlidia reflect the ecological diversity of euthyneuran heterobranchs at a small scale, allowing for studies of morphological adaptations to the mesopsammon and an evaluation of morphological requirements that enabled these slugs to overcome the physical barriers related to transitions out of the marine habitat.

In order to establish a phylogeny of Acochlidia as backbone to understand their complex evolution and to clarify their origin among Heterobranchia, I aimed to optimize taxon sampling (i.e., perform an ‘all-species’ approach) by re-collecting all described species at their type localities for molecular purposes. My efforts to optimize the character sampling comprise a multi-locus molecular approach which combines nuclear and mitochondrial markers, quality tests at the levels of primary sequences and alignments, and a critical evaluation of different phylogenetic approaches. Additionally, I contributed to an accurate and detailed morphological dataset via advanced 3D-microanatomy from histological semithin-sections in conjunction with immunocytochemical and ultrastructural investigation (via scanning and transmission electron microscopy) of different organ systems.

The presented multi-locus molecular phylogeny on the origin of Acochlidia placed acochlidian slugs and other traditional opisthobranch or ‘lower heterobranch’ taxa in pulmonate relationships, clearly rendering the long-standing taxa of Opisthobranchia and Pulmonata non-monophyletic. In a substantial reorganization of euthyneuran systematics, a new classification of Heterobranchia was established naming several higher taxa such as Euopisthobranchia (including most of the traditional opisthobranch lineages, but excluding Actenoidea and Nudipleura) and Panpulmonata (uniting paraphyletic Pulmonata with ‘opisthobranch’ Sacoglossa and Acochlidia and former ‘lower heterobranch’ Glacidorboidea and Pyramidelloidea). So far, further multi-locus studies on different samplings of heterobranch taxa reveal very similar topologies, and initial phylogenomic approaches on gastropod systematics also support what is emerging as the ‘new phylogenetic hypothesis of Heterobranchia’. Therein, my study on Acochlidia has demonstrated how the inclusion of small, previously neglected taxa can significantly contribute to solving deep phylogenetic relationship puzzles.

In the course of this thesis, my colleagues and I successfully re-collected approximately 85% of the described acochlidian species and added nearly another 50% of yet undescribed species diversity. The generated comprehensive molecular phylogeny of Acochlidia is highly congruent with morphological approaches and therefore provides a robust framework to trace their evolution in time and space. Based on ancestral area chronograms and ancestral character state reconstructions, Acochlidia originated in the mid Mesozoic Jurassic from a marine, mesopsammic ancestor, who was adapted to tropical waters. The two major acochlidian subclades emerging in the Jurassic exhibit remarkably different evolutionary histories: The Microhedylacea are highly adapted to the marine mesopsammon and present a stunning example of morphological and ecological stasis. Their specialization likely contributed to survival through major geological extinction events and to the present-day global distribution with high local densities of specimens. But it also resembles an evolutionary dead-end road to morphological and ecological diversity, pointing to an irreversibility of excessive regressive evolution. In contrast, basal meiofaunal Hedylopsacea retained or regained some morphological complexity and exhibit a remarkable flexibility in habitats. Their transitions out of the mesopsammon into limnic and (semi-) terrestrial habitats are connected to a secondary increase of body size and the reestablishment of a benthic lifestyle. The molecular phylogeny in conjunction with detailed microanatomical redescriptions allow for reconstruction of the evolution of e.g., reproductive and excretory features and an evaluation of their impact for the evolution of Acochlidia.

My thesis demonstrates the quality and accuracy of 3D-microanatomy for species descriptions in meiofauna. It also reveals the limitations of even high-end morphological approaches to delineate species of mesopsammic slugs reliably. Morphological species delimitation is frequently hampered by a combination of regressive evolution and simplified organ systems (providing few diagnostic characters) with high degrees of intraspecific variation potentially related to progenetic development in the evolution of meiofaunal taxa. Molecular species delineation on the other hand is complicated by the rarity of meiofaunal slugs, which are often discovered as singletons only. Therefore, previously established workflows on large-scale species delineation of hyperdiverse taxa need to be modified in order to deal with the problems symptomatic (yet certainly not exclusive) to many meiofaunal taxa. Herein, I present a workflow for molecularly founded, but nevertheless integrative, species delineation for elusive taxa, which aims to make best use of all (scattered) sources of data available. It presents a time-consuming form of ‘deep-taxonomy’, designed to complement ‘turbo-taxonomic’ approaches in cases where the evolutionary history of taxa urges to do so, e.g., to successfully tackle the taxonomic deficit in many meiofaunal taxa.

Workflows of species delineation must not terminate in the discovery of independently evolving lineages without proceeding to the final step of species description. In denying the discovered entities formal recognition, this form of molecular driven taxonomy betrays its own justification by enhancing instead of reducing impediments in taxonomy. My thesis discusses the use of molecular characters for taxonomy and practically demonstrates that, and how, molecular diagnostic characters can be included into the traditional taxonomic framework, either as additional source of data or even as backbone for descriptions of cryptic species. Ideally, this final step should be implemented in automated species delineation procedures in the near future to bridge the gap between species discovery and description – reuniting taxonomy.

By combining molecular sequence data with modern morphological analyses, I traced the evolution of Acochlidia through geological times and followed their pathways in and out of the mesopsammon. My thesis contributes to transforming an enigmatic, neglected taxon to a well-studied clade, providing the evolutionary background for further in-depth revision of its sister taxa and novel lineages likely to be discovered. Moreover, it offers a methodological example of how to address the diversity of elusive taxa to avoid this part of global biodiversity slipping through automated approaches of modern taxonomy, thereby missing its potential information for our understanding of the evolution of life on Earth.