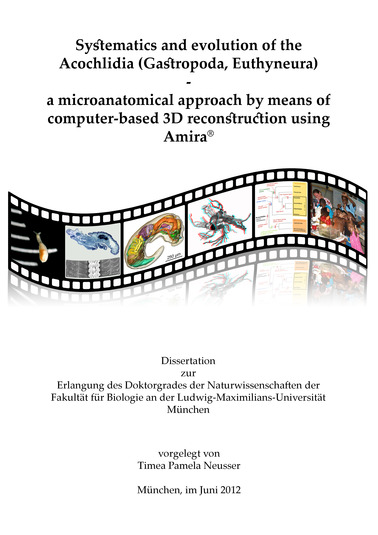 Only a small fraction of the estimated species diversity on Earth already has been discovered, and expected high extinction rates force biologists to rapid surveys. Molecular barcoding techniques meet such goals, but taken alone they can hardly connect genetic discoveries with the large morphology-based body of taxonomic knowledge that accumulated during centuries. Also, the study of organismic evolution requires reliable information on phenotypes. Morphological and biological knowledge on formally described species can be, however, very heterogeneous regarding both quality and quantity. Especially problematic are meiofaunal taxa – biodiversity generally is poorly explored, and species are small, hard to collect, externally quite uniform and difficult to distinguish by means of traditional taxonomic techniques. Old species descriptions often are fragmentary and information may or may not be reliable. Novel microanatomical imaging techniques raised the hope to combine the rapid examinations with the obligatory accuracy and desired comprehensiveness of structural information obtainable.

Among the most successful interstitial gastropod taxa are the Acochlidia, combining extremely high morphological and biological diversity with modest species diversity. The state of research at the beginning of my PhD thesis considered the Acochlidia as poorly known, enigmatic and morphologically and biologically aberrant Opisthobranchia, comprising only 27 valid species. Most of the acochlidian species are marine mesopsammic and distributed along the coasts of the world’s oceans, but some species succeeded to invade freshwater systems on tropical islands. Uniquely among the otherwise hermaphroditic euthyneurans, some acochlidians have separate sexes. Previous sampling efforts were biased to European waters and a few other places that had been visited by experts. Original descriptions of the acochlidian species were often limited to the external morphology, the structure of calcareous spicules and the examination of the radula by light microscopy; furthermore, some anatomical data were traditionally obtained from gross-morphological dissection or from paraffin-based histology. Inner acochlidian classification was controversial and neither morphology-based nor molecular phylogenetic studies resolved the origin of this traditional “order” among euthyneuran heterobranch gastropods.

In a case study for Mollusca, and for the first time for heterobranch gastropods, I comparatively explored the microanatomy of a representative sampling of known acochlidian taxonomic diversity applying computer-aided 3D reconstructions with Amira® based on serial semi-thin histological sections. My dissertation aimed (1) to revise the morphology and taxonomy of acochlidians, including the most dubiously and incompletely described species, (2) to generate detailed microanatomical data sets for comparative purposes, (3) to reconstruct global acochlidian phylogeny and major traits of their evolution, and (4) to explore the power and the limits of modern microanatomy against traditional taxonomy and molecular approaches, and to develop integrative approaches.

Original type material was traced in museums and institutions according to the literature and loaned for re-examination whenever possible. Most of the acochlidian species were re-collected at the type localities. Seven acochlidian species covering seven of eight families were re-examined in full detail; other species were studied to the level necessary and possible considering time constraints; additionally five species were introduced new to science. The microanatomical part of my dissertation clearly demonstrates that traditional acochlidian taxonomy did not provide sufficiently detailed and reliable anatomical information. In contrast, computer-based 3D reconstructions with the software Amira® are an efficient, powerful tool for microanatomy, providing a wealth of new data on all major organ systems of the Acochlidia. Transforming specimens into serial histological sections is “invasive”, but generates vouchers that carry testable information. Semithin-sectioning (1-2 µm) and staining as applied herein provide resolution adequate to trace relevant organs, ducts and tissues; limits of this method refer to quantitative detection of fine nerves. The process of preparing complete 3D models is time consuming, but greatly supports accurateness of finding and identifying structures and includes several steps of internal quality control. 3D models, especially when interactive, are attractive and instructive, comprise verifiable high-quality data, and revealed considerable amounts of erroneous data within original species descriptions. Former outliers – i.e. apparently aberrant and enigmatic species - fit well into the pattern of known acochlidian species after the correction of the original data. 3D modeling from serial sections as applied herein is discussed as the best currently available method for exploring complex soft part microanatomy in small invertebrate specimens.

Using the verified and supplemented morphological data, more than 100 morphological characters were defined and coded for all 27 acochlidian species considered valid at that time, and 11 euthyneuran outgroups. A cladistic analysis with PAUP recovered monophyletic Acochlidia originating from an unresolved basal opisthobranch level. The Acochlidia split into the Hedylopsacea (Tantulum (Hedylopsis (Pseudunela (Strubellia (‘Acochlidium’, ‘Palliohedyle’))))) and Microhedylacea (Asperspina (Pontohedyle, ‘Parhedyle’, ‘Microhedyle’, (Ganitus, Paraganitus))). The formerly enigmatic Ganitidae, resembling sacoglossan opisthobranchs by having dagger-like rhachidian radular teeth, were recovered as highly derived microhedylids. This topology is largely well-supported, robust to modifications of outgroup taxon sampling, and in principles was supported by a recent multi-locus molecular analysis. In addition, molecular analyses revealed the formerly enigmatic, amphibious Aitengidae also clustering within hedylopsacean Acochlidia. Although my phylogenetic hypothesis is not considered definitive, the paraphyly of some of the traditionally recognized family level taxa induced a preliminary reclassification of the Acochlidia.

Rarely among invertebrates, morphology-based and molecular acochlidian topologies are compatible, and thus may closely reflect natural relationships. Major traits of the acochlidian evolutionary history were reconstructed tracing character state changes on the tree. The previous hypothesis of a general regression of morphological complexity in the Acochlidia applies only for microhedylacean species. Within Microhedylacea, we confirmed a tendency towards successive reductions, particularly in the reproductive system. Species are aphallic, sperm transfer occurs by spermatophores and dermal fertilization and the secondary gonochorism evolved once in the ancestor of the Microhedylidae. In contrast, already basal hedylopsacean species show a complex excretory system adapted to a freshwater influenced environment. An evolutionary trait from a simple unarmed copulatory system towards complex hypodermal injection systems was recognised culminating in a large, trap-like spiny rapto-penis of several limnic Acochlidiidae.

In spite of a high level of convergence involved, precise microanatomical data sets on a vast (yet incomplete) ingroup sampling thus allowed reconstructing a novel, plausible and detailed hypothesis on acochlidian phylogeny and evolution. This approach may have considerable potential also in other groups with similarly small and rare members that are elusive to molecular studies. Limits of morphology-based phylogeny concern any subgroups with just limited information available, old and possibly rapid diversifications, such as the origin of Acochlidia among Euthyneura, and relatively recent subgroups with little phenotypical differences fixed. We show that traditional taxonomy fails to differentiate some genetically clearly distinct lineages. In Pseudunela, sophisticated microanatomy alone cannot reliably delimitate all of the evolutionary lineages, but may reveal diagnosable differences among pseudocryptic species once they have been delimited by molecular analyses. Integrative taxonomy combining modern microanatomical data on acochlidians with molecular analyses thus is superior to individual approaches.

With all key species revised in microanatomical and testable detail, and many additional species compared to such standard, now the Acochlidia probably range among the best described heterobranch groups. There is, however, still a critical gap of knowledge regarding biological observations and ontogenetic stages. Future work also should focus on resolving the exact origin of Acochlidia among Panpulmonata and on generating comparative anatomical data from potential sister groups. In spite of the urgency for speed facing the biodiversity crisis, my dissertation showed the essential need for revisory work on acochlidians, and this may be true also for other poorly known micromolluscs. Integrative 3D microanatomical and molecular approaches as exemplified herein are efficient, and thus suitable to explore the diversity and evolution of neglected micromolluscs within overall reasonable time scales.